Clancy of the overflow essay

The clan dungeon Dreadsylvania. Everyone becomes this during the Feast of Boris, gaining doubled eating capacity for the day. Banjo Paterson's poem of a century ago caught some Australian attitudes that are with us still. I had written him a letter, which I had, for want of better Knowledge, sent to where I met him at the Wheat Board, years ago.

That letter, unanswered or never received; the clumsy goings on in far-off lands; the great public unknowing, through perfected bureaucratic arts of the swamp now known as wetlands and sinkhole review, inquiry, commission — the old poem allows for it all in its wistful option of riding off into a neverland where accountability is left behind.

The lone male drover survives as a fantasy of settler mythology, the one who doesn't settle, the man on a journey to a void beyond communication and constraint.

But for me the poem also comes to mind whenever I reflect on Australia's attempts to engage in cultural dialogue with the outside world. The same attitudes often apply, of sending out a missive, just on spec, and then just waiting.

Here's how the original goes: And an answer came directed in a writing unexpected, And I think the same was written with a thumb-nail dipped in tar 'Twas his shearing mate who wrote it, and verbatim I will quote it: We accept that if we want to connect with someone or something out there, we have to go looking ourselves, because they won't come to us.

But girt and insulated by sea and immensity as we are, Clancy of the overflow essay readily retreat into a position where it doesn't matter if the connection with the rest of the world drops out. Having adapted ourselves to the tyranny of distance, we can hide behind it, with the world at a comfortable remove.

Perhaps we don't really want those complications in our backyard anyway. That is how it has often been. A lasting model for our relationship with other countries is one of sending things out, like the food parcels in wartime, the generous donations of foreign aid when disaster strikes overseas, the tours by sports stars and Indigenous artists and comedians that don't quite translate.

It's a high-minded attempt at small-scale colonisation, a pale imitation of the loud American export of products and values.

We don't always expect a reply. But my many years of involvement with cultural exchange projects where Australia participates in an international context have led me to observe certain ingrained characteristics that make us less successful than we should be in our cultural interaction with other countries.

Our international cultural relations have yet to achieve an enduring and comprehensive dynamism and depth, engaging us as we truly are in all our strength and potential.

Problems include a one-way mentality; the prejudice that travel of any kind, and especially cultural travel, is a junket or a rort; the lack of commitment to mutuality, and neglect of the reciprocal responsibilities incurred in accepting hospitality; a static model of culture as akin to stamp collecting that undervalues the process itself in its fixation on econometric outcomes; a second-guessing of what others might think or want.

Above all, there is the misunderstanding of culture as a proxy for other things, when in fact it is no more or less than who and what we are. Put most bluntly, Australian cultural exchange tends to be determined by a narrow sense of benefit to Australia, rather than a long-term sense of what in time might grow from and with Australia as a contributing partner to the contemporary world's intellectual debates, social issues and creative prospects.

What is the evidence? The expanding trade in resources — coal, iron ore and other minerals, wheat and wool — only confirmed the image of Australia as a farm and a mine. We hoped to vary that. I was struck this year, when the Australian dollar dramatically plunged as the commodities boom came to an end as part of the global financial crisis, that it was as if markets around the world had reverted to a default position — indeed, a nineteenth century British position — in relation to Australia: The rest counted for little.

Cultural diplomacy has failed to change those readings. They persist until proven otherwise, until the exceptions don't prove the rule so much as offer a substantial alternative. That's why it matters. To change how we are understood by the rest of the world, we must engage with the world differently.

As a framework for intercultural dialogue, I would add, those arts of peace also enhance people's quality of life, creative capacity and regard. They recognise that how others value us and how we value ourselves are indivisible.

The subject came up at the Summit, when some of us gathered on the hill for an interfaith dialogue on where Australia might go. What can we do to improve Australia's creative participation in the world's conversations — intellectually, artistically, socially?Good luck, Mysticgust!

Let us know if you’d like beta-reviewers– just leave a comment here or e-mail us at SuperheroNation[at]gmail[dot]com. Paul shares his thoughts on locations, models, photographing male nudes, contemporary art and lots more. Poem – Clancy of the overflow by Banjo Paterson. Topic sentence – “Clancy of the Overflow” is typical of an Australian Bush Ballad.

In this poem, Clancy serves as the representation of what Australians should be like, which is wild, adventurous, pioneering, friendly and free. 1Q84 Haruki Murakami $ "The year is 1Q This is the real world, there is no doubt about that. 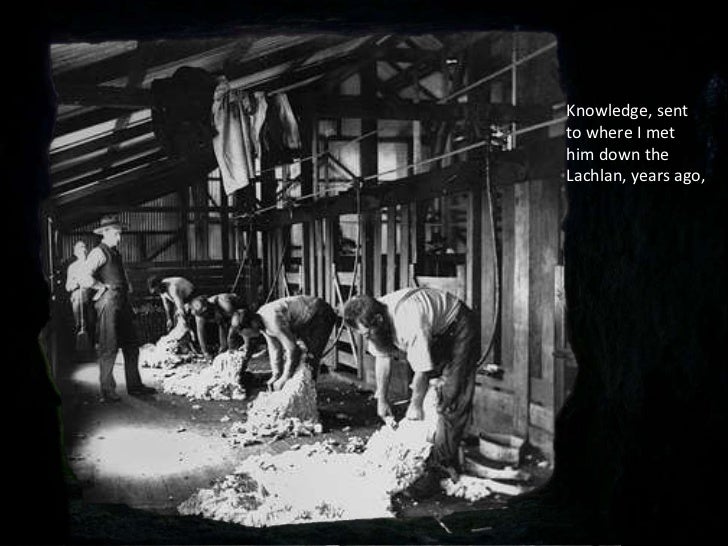 But in this world, there are two moons in the sky. Antananarivo, Madagascar U.S. Embassy Antananarivo alerts U.S. citizens to a plague outbreak which occurs each year in Madagascar.